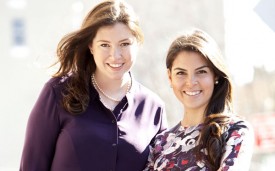 Women comprise 47% of the U.S. workforce, but just 25% of the STEM workforce. While the tech sector has a reputation of being occupied by white males, women are making a go at careers in STEM fields.

The success of prominent female leaders such as Facebook‘s Sheryl Sandberg and Yahoo‘s Marissa Mayer are bringing more attention to women in the tech sphere. But beyond the Sandbergs and the Mayers, there’s a crop of women who are not only leading, but also launching tech startups.

Below, we highlight 41 accomplished female founders; with businesses ranging from fashion and ecommerce to careers and social networks, these movers and shakers are changing the face of tech.

Von Tobel dropped out of Harvard Business School to launch LearnVest after winning an Astia business plan competition. With the confidence to get her plan off the ground, she raised a $1.1 million seed round in June 2009 and launched the business in December 2009. To date, the Drop.io and Morgan Stanley alum has raised nearly $25 million to fund the growth of LearnVest, a personal finance platform that offers tools, content and financial planning for women, covering everything from consolidating your debt to saving for your future. She describes her business model as “Weight Watchers meets personal finance.”

Singh Cassidy founded Joyus, a video-based ecommerce site that helps customers discover their new favorite things in apparel, beauty and lifestyle. Singh Cassidy was previously the CEO at Polyvore, (founded by another woman on this list), spent 18 years as an Internet and media executive at companies including Google, Amazon, Yodlee and News Corporation, and was the CEO-in-Residence with Accel Partners.

Laura Fitton was one of the first to realize that Twitter could be leveraged for marketing. She started Pistachio Consulting (hence her Twitter handle @Pistachio) and later wrote the book Twitter for Dummies, giving everyday people a chance to recognize the power of Twitter. Her next venture was oneforty, an app store for Twitter. Using her keen eye for spotting tech-trends, she created a hub for the best extensions and apps for Twitter based on a community of rating and sharing tools. Even though Fitton claims she was “thoroughly unqualified for the idea” when she came upon the plan, oneforty has become a huge success and was acquired by HubSpot last year; Fitton is the company’s inbound marketing evangelist.

A Y-Combinator and Harvard Business School alum, Vidisheva launched Shoptiques as a new way to shop online. While boutiques offer fashion to locals and tourists, many don’t have an ecommerce presence, making it hard to nab threads from local designers. Vidisheva raised her initial seed round from Andreessen Horowitz, Greylock Partners, Benchmark Capital, General Catalyst and SV Angel. The site is currently U.S. only, but Vidisheva is working to bring the Shoptiques experience to international consumers.

Kass is a serial entrepreneur, managing ventures alongside her husband, Mike Lazerow. The two started GOLF.com, which they sold to Time Inc. in 2006, then they launched the social media management software Buddy Media, which raised four rounds of funding and was recently acquired by Salesforce for $689 million. Kass brings extensive experience in marketing, consulting and business operations to the table, and describes herself as the most competitive person she knows.

In fall 2010, Yeoh participated in LaunchBox Digital’s incubator program, where she honed her business skills and launched her first startup, CityPockets, for which she raised $750,000 from Great Oaks Venture Capital and other angels. In March 2012, Yeoh launched Reclip.it as an innovative way to save money, share deals with friends and keep up with the latest deals offered by your favorite brands. As co-founder and chief executive officer, Yeoh drives the user experience and spends her free time as a mentor at The Founder Institute.

Magnusdottir, a veteran of the fashion world, co-founded Moda Operandi — which lets customers pre-order high-end apparel and accessories “straight off the runway” during seven-day trunk shows — with fashionista Lauren Santo Domingo in 2010. To date, the company has raised $46 million, a testament to the power of fashion ecommerce and to the business savvy of its co-founder. The Icelandic Magnusdottir has an MBA from Harvard Business School, an LLM from Duke University and an undergraduate law degree from the University of Iceland and was previously a VP at Gilt Groupe and co-founder of an investment group that works with luxury fashion brands.

Mountanos launched Manicube in June of this year. The mobile manicure service contributes $1 of each manicure to microloans abroad. So far it has proven successful in Manhattan and is on it’s way to other cities nationally and hopefully internationally. As of this time, Manicube is currently unfunded, however they plan to begin looking for investors this Fall.

Hartz studied at Pepperdine, geared up to be a TV executive with gigs at MTV Networks and FX Networks, and once interned on the set of Friends. In 2006, shejumped into the startup scene with her husband as co-founder. Their company, Eventbrite, has since raised $80 million. Eventbrite merges ecommerce with the social graph to democratize event ticket sales, and it’s likely you’ve used the platform to purchase tickets — the platform has helped event organizers sell more than $1 billion in ticket sales. Hartz is a proponent of fostering happiness in the workplace, and Eventbrite has been named one of the best places to work in the Bay Area.

Gina Bianchini is a serial entrepreneur whose custom social network creator Ning had an impressive 2.3 million user-created networks and more than 45 million registered users when she resigned in March 2010. She moved on to startMightybell, which helps users break a big idea — anything from a recipe to a cross-country trip — into small, doable steps that can be shared to social networks. She’s also spent time as an entrepreneur-in-residence at Andreessen Horowitz and has invested in and advises Levo League, the female-helmed career-oriented startup.

After getting her MBA at Dartmouth College, Sun spent two years working as the Vice President of Merchandising and Inventory Planning at the female-foundedBrooklyn Industries. In 2007, she co-founded Est. Today, a site that allowed young girls to design their own fashions and share their creations with their friends. In 2010, Sun teamed up with Kaboodle co-founders Manish Chandra and Chetan Pungaliya to launch Poshmark, an iPhone app that lets you browse, buy and sell clothing and accessories.

Earlier this year, Wallace and fellow Harvard Business School graduate Alex Nelson co-founded Quincy, an apparel company designed to flatter any woman’s body type. Instead of general sizing, Quincy focuses on specific measurements to make sure that blazer/dress/blouse fits you perfectly, making shopping a much more gratifying and efficient process for women. Wallace is a practiced public speaker and a guest blogger for The Daily Muse and Women 2.0.

Tryon co-founded art rental company Artsicle in 2010. The site lets users rent art by emerging artists, enabling customers to dabble and discover their taste and preferences. The Penn alum was a would-be collector who was frustrated with the stuffy New York gallery scene and curators who didn’t take her seriously as a buyer, and she kept running into up-and-coming artists who had trouble distributing their work. She went to work on the “try before you buy” concept and works out of Dogpatch Labs with her boyfriend and co-founder Scott Carleton.

Moreland has made the shopping and dressing room environment social with Fashism, which she launched in 2010. The site lets users post a photo and get instant, crowdsourced feedback from a community of shoppers and fashionistas, helping women make better purchases and discover new trends. The idea stemmed out of one of Moreland’s own experiences, when she walked out of the dressing room seeking her husband’s opinion, and all she found was an empty couch. She previously worked in broadcast media at Departure Films and JWT.

After completing a PhD in Cognitive Neuropsychology at Brown University, Rashmi Sinha moved to San Francisco to conduct her postdoc research. She soon became bored with lab work, instead falling in love with the burgeoning field of web technology. Sinha co-founded Uzanto, a user experience consulting company, working with companies including eBay and Blue Shield. In 2005, she launched her first product, MindCanvas, and co-founded SlideShare a year later. Today SlideShare is the world’s largest community for sharing presentations, with 60 million monthly visitors, and it was acquired by LinkedIn in May.

Before launching Foodspotting in January 2010, Andrzejewski was a User Experience Designer at Adaptive Path. The time she spent helping startups create user-centered platforms spurred her desire to build her own UX-driven company. During a trip to Japan with her husband, Andrzejewski noticed that everyone around her was snapping photos of food. Andrzejewski was curious about the destination of these photos, and she was also inspired — frequently trying new dishes, she needed a way to identify them when she returned to San Francisco. From this experience, Foodspotting was born.

After integrating digital into the marketing efforts of the NBA’s Phoenix Suns, Amy Jo Martin founded DigitalRoyalty in 2009 to help companies, celebrities, professional sports leagues and athletes strategize, build and monetize their digital universe. With 1.3 million Twitter followers, Martin is known as a social media expert who consults with people on how to create a better personal brand for themselves on social media, and she’s helped to develop brands such as Shaquille O’Neal, The X-Factor and Nike. Martin is currently working on her first book, Renegades Write the Rules, due out later this year.

Read the rest on the full article here.