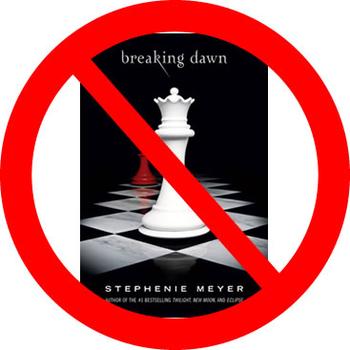 By now everyone’s heard the jokes about how bad and terrible the vampire-romance series Twilight is. Yes, it has cheesy sparkling vampires and transforming werewolf men who keep losing their shirt seemingly every ten minutes. If you haven’t heard about Twilight, then maybe that brief description sounds campy enough.

But does Twilight actually do women a disservice? Is it actually setting an idealistic bad precedent, undermining prior efforts at femininity, equality, and romance?

I think it does.

In Twilight an ordinary girl, Bella, wishes for a fantasy, and then she meets Edward, a handsome teenage guy who turns out to be an immortal vampire. And apparently he doesn’t like to feed on people and he sparkles in daylight instead of turning to ash, stone, or generally shunning it entirely.

Now, some other supernatural forces don’t approve of this love interest and seek to intervene. Bella however spends her time running, getting kidnapped, and waiting for Edward to save her. In fact, all she does is cry his name more than half the time while waiting for him.

In later books, a “dreamy” werewolf takes a keen interest in her and fights Edward the vampire over her. She does nothing but just watch and let the “big strong men” duke it out. When more vampires and werewolves come to kill her later, the two fight to defend her. Bella meanwhile again just does nothing but effectively watch from the sidelines.

Ultimately, all she does is play the victim. She lets things happen to her, but she herself really does nothing.

Now, this isn’t any different that your typical “save-the-kidnapped-princess” story motif. But there’s one problem; those stories were written back in a different mindset, one that continually portrayed women as helpless, little better than trophies for the hero to earn.

It sets a precedent of “Don’t fret, little girl. Your hero will come for you. Don’t fight back, as greater forces than you are at work.” Or another way of looking at it, “Be quiet, the adults are talking.”

It also sets up a narcissistic self-worth; that no matter what “big strong men” will fight over you. That a girl need not raise a finger, that in effect by being beautiful she is entitled to the world coming at her.

In countless stories the hero is a man working to save a women. He is the protagonist, he is the one readers identify with. Not the woman; she is an end-goal, a prop, a MacGuffin. She is an excuse for the story to be made.

But in the past few decades we were breaking away from that. More cartoons, video games, and movies had strong women who fought back against the “bad guys.” Women weren’t just victims, they were warriors too. Buffy the Vampire Slayer had a women as the protagonist, who in fact was the hero (or rather, heroine).

Buffy was groundbreaking in a way as it portrayed the pretty girl, who often was always a victim, as the epic vampire slayer. And women of all ages related to her. Young girls looked up to her and wanted to be her. People of all ages tuned in to the show for years. The premise, and the show, was profitable…and therefore marketable.

And Buffy wasn’t the only one. There are other memorable female protagonists. Ripley from the Alien movies. Sarah Conner from the Terminator series. Xena: Warrior Princess was every bit as “awesome” as Hercules: The Legendary Journeys.

My point is that stories about strong female leads have been successful. For the movie and television studios that is all they’re concerned about, the profits. But what makes those stories important for women is that they showcased strong female role models, ones that are more modern and relatable than even Wonder Woman.

Those heroines showed female audiences that it was good to fight back, to struggle for what you wanted, to be a hero. That they didn’t have to wait for someone to come for them. And that the world did not come to them because they were a pretty girl, they had to venture worth and find their self-worth like everyone else.

But Twilight and, in my opinion, its undeserved fanbase have taken those lessons and set them all back. We’ve stepped back from “warrior princess” to “kidnapped princess.” The girls who walk away liking Twilight have been given all the wrong impressions of what it means to be a woman.

Would someone emulating Bella fight to climb the corporate ladder to one day become a CEO? No, they’d rather marry a rich husband. Why? Because that’s effectively what Bella does in the book, that’s what her personality would do. Would someone thinking like Bella create a lasting, meaningful relationship that’s not based on just passion but of deep understanding, respect, and personal connection? No, they’d find whoever is the most attractive and let their lust direct them. Why? Because that’s what Bella did; she anchored herself to a hunk and then let other hunks fight over her. It brings to mind a more negative female stereotype from movies and television: the stuck-up and obnoxious cheerleader.

And what alarms me is that Twilight has become profitable. It has proven itself to be marketable. Its fans have voted with their dollars that this is what they like, so Hollywood is bound to make more stories like it. The literature world has already swelled with imitators, and in all of them they promote similarly weak-willed female lead characters.

This isn’t going to lead to the “end of the world.” But it’s going to leave an impression on its audience. And it’s leaving a negative one. The women who fought for women’s rights were not meek, nor did they think themselves self-entitled. And the women who should continue to fight for gender equality cannot be weak either. They can’t be Bellas. They need to be Buffy’s, Ripleys, and Xena’s. Because if any of those three women were in the shoes of today’s female activists, they wouldn’t be quiet. They’d be leading the charge.

If Bella were in those shoes, she’d wait for her man to come home and take her out to dinner.

Feminism is about equality. It is about women being treated equally, they should not be looked upon as less than men nor more than men. Both sexes deserve to fight for their rights, and both sexes should. Because in real life, there are no sparkling, super-strong vampire lovers to do the fighting for us.

I admit this is a strong and provocative opinion. Do you agree, or think I’m way off the mark? Let me know your thoughts in the comments section below.