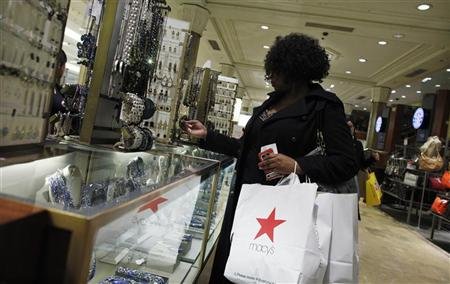 WASHINGTON (Reuters) – Americans felt worse about their personal finances in early February, but rising confidence in the labor market’s prospects should help to support spending and the broader economy.

The Thomson Reuters/University of Michigan overall index of consumer sentiment fell to 72.5 in early February, data showed on Friday, from 75.0 in January. It was the first drop in six months and reflected households’ anxiety over their finances.

The ebb in morale comes despite the recent run of relatively strong data, including solid job growth and manufacturing activity.

“While there is plenty of positive momentum in the economy there is still plenty to worry about,” said Lindsey Piegza, an economist at FTN Financial in New York.

Households continue to struggle under the weight of huge debt loads and a sustained decline in house prices also is not helping.

While consumers worried about incomes, they reported a record level of optimism about job prospects.

“This pattern of responses – less favorable current assessments and more favorable prospects – is not surprising. It simply indicates that consumers find their current situation all the harder to bear when improvement is finally in sight,” said sentiment survey director Richard Curtin.

Employers added 243,000 workers to their payrolls in January and the jobless rate fell to a three-year low of 8.3 percent.

Some economists were not too worried about the slide in sentiment early this month.

“The Michigan index is not seasonally adjusted and tends to be weak in February so the decrease in sentiment reported this year may partially be a reflection of this seasonal pattern,” said Daniel Silver, an economist at JPMorgan in New York.

Boris Schlossberg, head of research at GFT Forex in Jersey City, New Jersey, noted there was a “massive discrepancy” between consumer sentiment and buying patterns.

“We are seeing better-than-expected retail sales on a weekly basis,” he said. “If we get three consecutive months of 200,000-plus new jobs, then sentiment may catch up.”

Other data on Friday underscored the economy’s firming tone.

The trade deficit widened to a six-month high of $48.8 billion in December as goods imports climbed to the highest level since July 2008, just before the financial crisis caused world trade to plunge.

“The improvement in both import and export demand can be seen as a positive development as it not only suggests that the U.S. economy is enjoying improved global demand for its products, but the improving U.S. economy is being reflected in growing appetite for foreign goods,” said Millan Mulraine, senior macro strategist at TD Securities in New York.

The trade gap, however, was not as big as the government had anticipated when it made its advance estimates for fourth-quarter gross domestic product.

That, together with sturdy construction spending in December and rising wholesale inventories, suggest the preliminary reading of 2.8 percent growth in the final quarter of last year could be raised to a 3.2 percent annual rate, economists said.

For the year, the U.S. trade gap swelled to $558.0 billion, the largest since 2008. The widening trade deficit is expected to slow growth in the first half of this year as a recession in the euro zone hampers exports to the region.

Traders shrugged off the reports, remaining focused on developments in Europe. U.S. stocks fell on news of a setback in Greek debt bailout talks, while U.S. Treasury bond prices rose. The dollar advanced against the euro.

The deficit with China last year soared to a record high $295.5 billion, a development certain to reinforce concerns in Congress about Beijing’s currency and trade practices ahead of a meeting next week between U.S. President Barack Obama and the Asian giant’s expected next leader, Vice President Xi Jinping.

U.S. exports to China jumped 13.1 percent to $103.9 billion. But that was overwhelmed by a 9.4 percent increase in imports from China, which pushed the tally to a record $399.3 billion.

Even as the U.S. trade shortfall with China grew, other data on Friday showed China’s overall current account surplus shrank in 2011, offering Beijing fresh evidence to show critics of its currency policy that it is relying less on external demand.

However, a big import drop in January combined with a smaller export decline left China with the biggest trade surplus in six months, confounding expectations of a further narrowing.

Last year, the Democratic-controlled Senate passed legislation to pressure China to raise the value of its currency, but that bill hit a dead end in the Republican-controlled House of Representatives.

Many lawmakers believe that China deliberately undervalues its currency to give its companies an unfair price advantage, contributing to the huge bilateral deficit.

The U.S. trade deficits with the European Union and Canada also expanded in 2011.