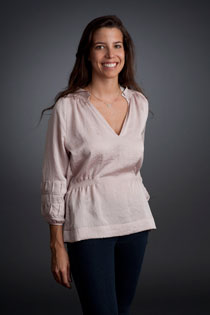 Taryn Cook is the project manager at San Diego and New York based architecture firm, Colkitt&Co. At just 28 years old, Taryn won the 2014 VMSD Designer Dozen award, recognizing her as one of 12 up-and-coming designers under the age of 35.

She manages an array of projects across the retail, hospitality, residential and commercial industries in all phases, including concept development, schematics, construction and design, to completion. Her primary responsibilities at the firm include: coordinating with consultants or vendors, preparing and reviewing proposals, budgets, schedules, construction documents, specifications, consultants’ reports, bids, special purchase orders, construction observations and clarifications, and furniture, fixtures and equipment.

Taryn has managed architecture projects for dozens of retail stores in Canada, Dubai, Greece, the U.S. and Caribbean. Specifically among these, include a number of PUMA Outlets. Taryn approaches these projects from a very analytical and measurement-driven point of view.

Her smart balance of creativity and experimental curiosity make her a standout among peers as she designs retail store layouts, stockrooms and storefronts, while analyzing branding, sales and stock capacity, lighting, circulation, security and new material specification research.

One of her distinct responsibilities includes translating clients requests in each project as well as anticipating possible issues before they arise. She catches anything that may have been forgotten or ignored well before construction to avoid unwelcome “surprises” that can pop up during construction or add unforeseen costs.

Although most of her time is spent in managing, she also works in optimizing each store’s layout to render the maximum SKU capacities as well as both the customer and employee experience. She comes up with the most logical, efficient and operational back of house, as well as maximizes sales merchandise without compromising the customer experience.

Taryn has worked at Colkitt&Co since 2010. She received a Bachelors in Fine Arts, Journalism and French from George Washington University and a Masters in Architecture from the New School of Architecture and Design. Taryn is currently based in New York, but was born and raised in Switzerland.

She speaks English, French and Spanish, which have also helped shape her ability to work with a wide range of team members, vendors and clients. Her personality and work ethic make others around her feel at ease, as she manages the back and forth on projects, or calmly navigates any challenges or issues that arise.