In the United States, as elsewhere, feminism could be characterized as the most successful social movement of the 20th century. Yet, perhaps because of its uneven impact, it seems to be losing momentum.

Cultural and political mobilization around women’s rights led to important legal gains, including the right to vote, prohibitions on overt discrimination and access to contraception. Women increased their participation in paid employment and political office, and many climbed into professional and managerial jobs.

Over the last 20 years, however, the pace of change in attitudes, labor force participation and relative earnings has slowed, leading to speculation about the “end of the gender revolution.”

In my view, this revolution has not ended. But it has, like most revolutions, fallen far short of its ideals. In 2010, women’s earnings, adjusted for factors that could affect pay – like age, race, education, number of children in the household and part-time status – amounted to about 86 percent of men’s. 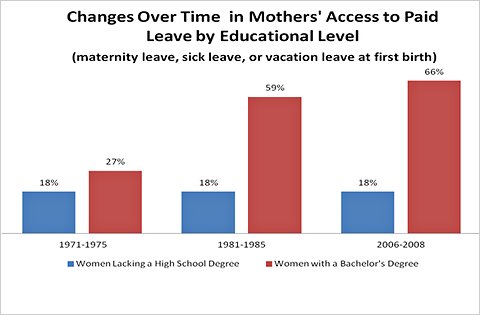 Perhaps movement toward equality is necessarily slow. Some people seem to worry that men won’t want to marry women who are not their subordinates. And many women seem to prefer predominantly female occupations, even though they pay less.

Gender inequality in earnings strongly reflects the penalty imposed on caregivers who take time out of paid employment. Median full-time salaries of young, unmarried, childless women under 30 living in cities are higher than those of their male counterparts.

Demographic differences among women now have a large class dimension. A substantial share of women with a college degree – 23 percent of those ages 40 to 44 in 2008 – remain childless. Yet the college educated are now more likely than others to marry, a factor that contributes to their higher family income. Married fathers are more likely than others to live with their children and contribute directly to their care.

Class and racial and ethnic differences among women have intensified over time. The higher earnings of college-educated mothers make it possible for them to purchase child care and help with housework (typically performed by low-wage women workers). A recent paper by the economists Delia Furtado and Heinrich Hock shows that the number of low-skill immigrants living in a large city reduces the tradeoff between employment and fertility for women college graduates.

Outsourcing of care responsibilities can have many positive effects, but it reduces the potential for cross-class gender coalitions. Emphasis on changes in women’s average or median earnings relative to men often conceals growing inequality among women.

As Leslie McCall, a Northwestern University sociologist, describes recent trends, “Absolute gains among women as a whole, and visible absolute gains among more highly educated women in particular, came at the expense of the worsening situation of low-skilled women, whose real wages have been falling.”

A college education often provides access to relatively flexible jobs. As Jennifer Cheeseman Day of the Census Bureau explains in this webinar recently orchestrated by the Population Association of America, women in professional-managerial occupations are more likely than other working women to reduce their hours of employment when they have a preschool child, a factor that can help them achieve better work/family balance.

Women in less remunerative occupations are often forced to choose between making do with long hours or finding part-time jobs that pay even more poorly and don’t offer benefits.

In the same webinar, I discussed the chart above, showing that employed college-educated women are now more likely than they once were to enjoy some paid leave from employment upon the birth of their first child – 66 percent in 2006-8 compared with 27 percent in 1971-5. Employed mothers without a high school degree, by contrast, have remained stuck at 18 percent.

As the webinar also points out, paid family leave is a universal entitlement in virtually all other affluent countries, where child care and early childhood education are also subsidized more generously.

Demographic and economic differences among both women and men in the United States make it difficult to mobilize support for such policies here. And in the absence of such policies, inequality is likely to intensify.

The gender revolution didn’t cause this problem, but it is surely being hindered by it.

Nancy Folbre is an economics professor at the University of Massachusetts, Amherst.