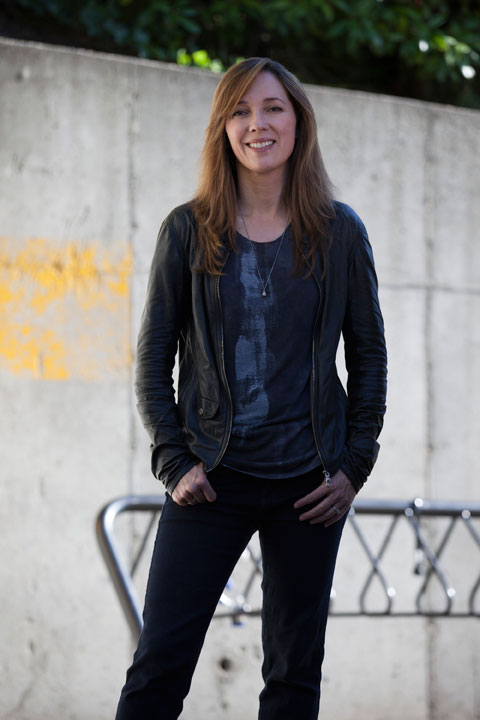 The woman who leads the popular Halo video game franchise says her sports background not only got her into gaming, but helped level the playing field in a traditionally male-dominated field that she wants more women to enter.

She also credits her success to the foundation of technical and communication skills gained from her internship and education while attending Colorado State University.

Bonnie Ross is corporate vice president at Xbox and head of 343 Industries, the studio that oversees the Halo video game franchise.

Fortune magazine called her one of the 10 most powerful women in video games in 2014.

“After my talks, I have a ton of women and girls come up to me and say, ‘I didn’t know you could do this,’” Ross says, referring to speeches she has given at events focused on women in science, technology, engineering and math (STEM).

The California native played sports growing up, and her first video game was a rudimentary basketball handheld made by Mattel in the 1970s.

“Ultimately, I ended up in gaming because of sports,” Ross says.

Her sports background paid off in other ways early in her career. Her ability to hang with — if not beat outright — her male co-workers in noon basketball sessions and company softball games helped her gain respect among her peers. It also provided valuable lessons for her profession.

“Having the ability to fail, learn from your failures and surround yourself with people who have other strengths is key,” Ross says. “And leadership does shift, whether it’s on the court or the field. You may start out as the point guard, but your role changes. Leadership is dynamic, and the leader is not always the one out in front. You need to know when to be in front and when to take a step back.”

She started her college career in engineering, in part because her dad was an engineer. But as was typical during that time, she was one of the only women in her engineering major. In addition to wanting more creativity, she found it difficult to see how the skills she was learning would translate to a job in a STEM discipline.

“It’s a common challenge, especially with women in STEM fields, not being able to see what you can do with that education,” Ross says. “If you become a doctor, you know you’re going to end up with a stethoscope around your neck. In engineering, you don’t always see how to apply it. It’s not an obvious endgame.”

It’s a problem that CSU has already taken on: The university recently received a $2 million grant from the National Science Foundation to better connect what is taught in electrical and computer engineering with real-world applications. Ross lauds efforts like these to increase the number of women in the pipeline for STEM fields.

“We have an issue that starts in high school and college,” she says. “You can’t recruit them if they’re not there. How do we make technology and engineering the fields that both men and women want to pursue?”

“It’s a huge priority in our college, recruiting and retaining more women in the STEM disciplines,” she says. “Someone like Bonnie is such a wonderful role model for how women can be successful in these fields. We need to provide women with more support and networking. For example, in our college all female faculty belong to our Women in Natural Sciences program, which works to promote and sustain a positive environment for women.”

At CSU, Ross ended up switching to a fledgling technical writing track in the journalism department during the 1987-88 school year. Through that program she gained a summer internship at IBM, where they liked her work so much they kept her on.

“This move seriously changed my life,” she says. “This was an amazing three-month internship, and because they thought I was doing a good job, it got extended to a two-year internship. My combination of technology and writing was hugely beneficial.”

In her free time, Ross wrote UNIX programming manuals for CSU’s computer labs. She was also an assistant coach for high school tennis teams and junior high basketball. She graduated in 1989 with a degree in technical communication and a concentration in physics and computer science.

“When I applied to technology companies because of my degree in technical communication, which was brand-new at the time, it really opened up a lot of opportunities,” Ross says. “Hewlett Packard, Texas Instruments, Microsoft and others opened their doors to me because they said they had a bunch of fiction writers trying to be tech writers.”

“She tied together an innovative collection of courses, including computer programming, physics and math,” says Greg Luft, head of CSU’s Department of Journalism and Media Communication, who recalls having Ross in one of his classes. “She did that 10 years ahead of the Information Science and Technology academic minor, which was created to help students like Bonnie blend programs in journalism and media communication, computer science, computer information systems, business and psychology. She was well ahead of her time.”

Between the IBM internship and CSU education, Ross says she was well-prepared.

“Coming out of that overall experience, I felt very technically ready,”

she explains. “I definitely felt I could hold my own, and that was critical to moving through the company at Microsoft. The skill set I had helped me move up the ladder in program management.”

Fittingly, her first job in games was as producer of an early basketball game for the PC. She predicts that technical experience, more than gender, will make the difference in who gets jobs in the industry in the coming decade.

“I believe, in the next five to 10 years, it’s not going to matter who you are,” Ross says. “If you don’t have a technical background, you won’t go far.”

Now, she has two kids of her own, ages 8 and 9. She says that as a parent, she limits her older child to the mobile Halo games and a sneak peek at the new Halo 5: Guardians, which are rated for teens. She acknowledges that parents need to make the right decision for their children — but if their kids play games, her advice is to join them.

“Your kids are going to play games,” Ross says. “I highly recommend playing with them and talking about it, navigating that experience with them. A lot of the time you get them talking. They’ll open up as they’re playing.”

Her chosen field ended up being an ideal combination of her interests.

Ross says she enjoys the artistic side, like using various light sources from different angles to develop Halo 5: Guardians, which was released in October.

“To blend art and science, that’s my sweet spot,” she says. “I love how technology is bringing the arts to life. With gaming, I found my place. I found my passion of technology melding with art.”

And Ross credits her staff with the fact that she was the focus of the lead story in Bloomberg Businessweek on Oct. 22.

Luft reached out to Ross once he saw the Bloomberg piece.

“When I saw the article and connected Bonnie as a student in my broadcast news class during my first year at CSU, I cringed,” he says. “That sticks in my mind as the single worst class I ever taught, so I felt compelled to send her a note to congratulate her for her success despite the class. She was very gracious, so she either has a bad memory, or is a consummate professional. I’d bet on the latter.”