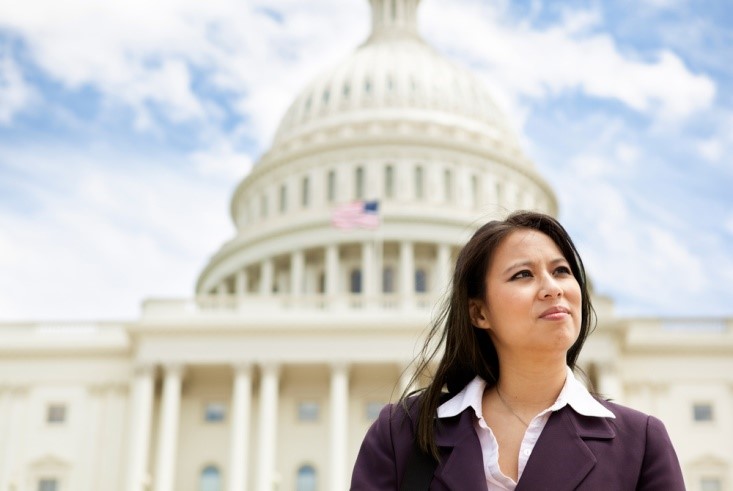 While Hillary Clinton is the first female majority party candidate, in the vast majority of our political system, women are conspicuously absent.

Since women gained the right to work in public office in the early 20th century, our movement toward political power has been excruciatingly slow. Today, more women than ever claim seats in state and national legislatures, but that only amounts to about 20 percent of legislative positions. Now that Hillary Clinton has a real shot at breaking the final glass ceiling in the political sphere, it is time for women to demand a larger share of political power; it is time for us to take over politics.

The Need for Women’s Voices

Whenever anyone discusses the need for more women in politics, critics tend to trot out the term “identity voting.” This concept suggests that female voters will vote for females (or voters of color will vote for politicians of color, etc.) simply because they identify with an aspect of their identities. Indeed, the vast majority of black legislators come from districts that are predominantly black, but that fact fails to disprove the idea that representatives who look like their constituents aren’t better at supporting the causes that matter to them.

Women make up half of America’s population ― in fact, slightly more than half, at 50.4 percent ― yet, we allow men to maintain control over 80 percent of our political system. The ramifications of this are evident: Women’s issues are regularly pushed aside as niche concerns while half of the country suffers without adequate support from the government. Women’s health care, child care, equal pay and education, and fighting violence against women are important issues, but they continue to be ignored or misunderstood without women in Congress to address them properly. The more women we have in politics, the better.

Though the list of prominent female politicians isn’t particularly long, it is filled with names and stories that can inspire young women to enter politics. In fact, we can delve into history, look to other nations’ political systems, and even peer outside the political sphere for female role models.

Despite her divisiveness, Hillary Rodham Clinton is undeniably an influential and important female figure in politics. Though she is not the first woman to run for the presidency, she is the first to lead one of the dominant parties, and she is the first to command a majority following prior to the election. Clinton’s political career has been long and fascinating, serving not only as America’s first lady but also a devoted U.S. senator and secretary of state. Whatever your politics, it is obvious that Clinton is a powerful female leader and admirable role model for aspiring girls.

The experiences of other historical and contemporary women in power may also establish precedence for more girls and women to become interested in politics. From figureheads like Queen Elizabeth II or Eleanor Roosevelt and world leaders like Germany’s Angela Merkel down to lauded political journalists like Kelly O’Donnell demonstrate that women deserve to contribute their voices to political discussion.

A handful of other countries are already doing quite a bit to discourage the gender disparity and open political doors for women. For example, the Republic of Ireland once boasted the lowest proportion of women in government among European countries, but in 2011, it reorganized its political system, blocking access to campaign funds unless its parties could muster at least 30 percent female candidates. Today, women comprise nearly 30 percent of Ireland’s Parliament ― a jump of almost 15 percent in five years ― and female voters are more active in the election process.

Positive action, like instituting quotas, is a proven method of getting more women into government. In fact, the majority of countries that surpass America’s female congressional representation either currently uses or has used active methods. Though it may seem an aggressive tactic, it might be what America needs to break down gender barriers.

Of course, there are other ways to encourage women to enter politics. For example, we might alleviate some of the difficulties required to obtain jobs in local governments. Usually, local elected officials claim little benefit in the way of pay, forcing local politicians to juggle full-time jobs and family commitments with the escalating responsibilities of office. Because local government can be a training ground for national politics, making the space more inviting to women might be a smart first step.