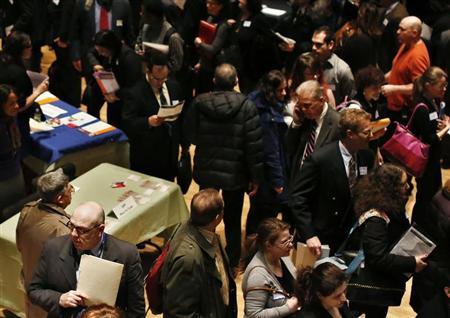 “We are not getting a slowing in the second quarter. The claims data provide another set of confirmation that the labor market is healing,” said Michael Strauss, chief economist at Commonfund in Wilton, Connecticut.

Initial claims for state unemployment benefits fell 4,000 to a seasonally adjusted 323,000, the lowest level since January 2008, the Labor Department said on Thursday.

The third weekly decline confounded economists’ expectations for a rise to 335,000. Layoffs remained contained even as other parts of the economy such as manufacturing showed strain from belt-tightening in Washington.

“No sign of a summer swoon in the labor market this year yet. We think the economy is strong enough to stand on its own two feet,” said Chris Rupkey, chief financial economist at Bank of Tokyo-Mitsubishi UFJ in New York.

The government said last week that employers added 165,000 workers to their payrolls in April and that hiring in the prior two months was much stronger than previously believed. The jobless rate dropped to a four-year low of 7.5 percent.

But the claims data pushed up the dollar against a basket of currencies. U.S. Treasury debt price were little changed.

The four-week moving average for new claims, a better gauge of job market trends, dropped 6,250 to 336,750. That was the lowest level since November 2007, just before the economy slipped into recession.

The number of people still receiving benefits under regular state programs after an initial week of aid dropped to its lowest level since May 2008. Continuing claims, which lag by a week, are a closely watched measure of long-term unemployment.

The improvement in employment contrasts with a range of other data that have suggested a cooling in the economy.

Separately, a number of top U.S. retailers reported disappointing April sales on Thursday as consumers gravitated to discount chains because they were pinched by the end of a payroll-tax cut in January. The government will release its retail sales report on Monday.

The slowdown in activity after the economy expanded at a 2.5 percent annual pace in the first three months of the year has been blamed on the higher payroll taxes and $85 billion in government budget cuts known as the “sequester.”