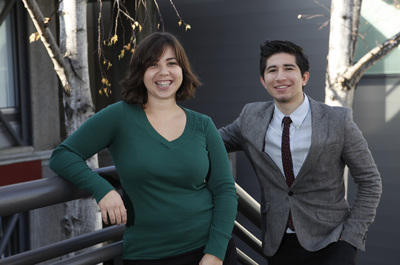 Women are leapfrogging men into the classroom at the nation’s largest university system, redefining the gender gap on California State University campuses in a startling way.

About six out of 10 CSU graduates last spring were female — a complete reversal over the past four decades. Some campuses, like Dominguez Hills and Stanislaus, have almost twice as many women as men, feeling eerily like women’s colleges.

Women are pouring into college at elevated rates all over the country — not only at two- and four-year schools, but also into professional and graduate programs. The profound shift comes two decades after educators issued an alarming report entitled “How Schools Shortchange Girls.”

“It shows you how quickly things can change. Not only are women being more encouraged to go to college, it is necessary. It is expected,” said Cal State East Bay student Lyla Pehrson, 25, a low-income student from the tiny Humboldt County town of Trinidad, who was raised by her father, a commercial Alaskan fisherman.

“As women, we are realizing that with the economy being as it is, we can’t depend on a man to bring home the bacon and make everything be OK,” said Pehrson, whose mother did not attend college. The 25-year-old serves in her student body government and works two jobs to pay for school.

The student bodies at the University of California and California community colleges average about 55 percent female — slightly less than CSU’s 59 percent.

Nationally, women have represented about 57 percent of enrollments at American colleges since at least 2000, according to a report by the American Council on Education. They have surpassed men not only in bachelor’s degrees, but also master’s degrees Ph.D.s.

But female enrollment skews even higher among older students, low-income students and minority students — the demographics of the CSU population.

Private universities can shape their classes — so schools like Stanford, with an incoming class that is 47.5 percent female, and Santa Clara, which is 51.4 percent female, are gender-balanced.

But public schools accept all qualified students, so they reflect the larger societal shift.

“We don’t reach out more to women than men. We’re not trying to recruit more women than men,” said Greg Smith, associate vice president for planning and enrollment management at Cal State East Bay, which is 60 percent female. “We put the message out there, encouraging all to apply.”

“What happens is that women more successfully respond to that message,” he said.

Researchers cite several reasons: Women tend to have higher grades and test scores; men tend to drop out of high school in disproportionate numbers; and women recognize they need a college degree to approach pay equity with men.

“I mainly attribute it to social and economic factors. Minority men are more likely to be unemployed, incarcerated or dead. I was fortunate to have the great support of my father,” said Christopher Prado, 21, president of the student government at Cal State East Bay and the first member of his Mexican-American family to attend college.

Many of his friends were attracted by the lure of quick money, he said. “When you get out of high school and can work at a warehouse for $400 a week, every single week, that seems like a lot of money,” he said. “But it’s not an investment. It’s an illusion.”

The good news is that both men and women are attending college in higher numbers. Applications to attend CSU next fall have surged — from 611,225 to 665,860. The university still doesn’t have a breakdown of how many of those applicants are women.

Women’s advances don’t “translate into a loss for men,” said Mikyung Ryu, Associate Director for the Center for Policy Analysis at the American Council on Education. “It’s not a zero sum game.”

But at other campuses, students say they miss the male voice.

“We lose the perspective that comes from men when there are open classroom discussions. We get a lot of the female view,” said Jesseca Stone, 35, who is earning a Liberal Studies degree, along with a teaching credential, at Cal State East Bay’s Concord campus.

Although she’s focused on studies, not dating, Stone said men “are very few and far between, if you’re even remotely thinking about meeting someone.