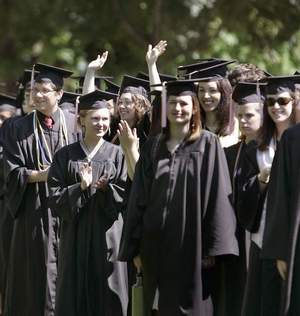 Men have long been outnumbered by women in higher education in the U.S., going back to the 1980s. What’s drawn less notice is they are also less likely to earn bachelor’s degrees.

Graduation rates across nearly all University of Wisconsin System schools are consistently higher for women. Last year, 62 percent of the females who entered the UW System in 2004 had graduated, compared with 58 percent for men.

While there’s lots of talk of improving overall graduation rates and getting more minorities to earn degrees nationwide, few colleges have sounded the gender alarm. Some experts say it’s time.

“If we lose these young men … one has to wonder, what’s going to happen? It has to be part of our mission to find out what’s going on and what can we do,” said Mary Hendrix, vice president of student success and access at Texas A&M University-Commerce, where women are nearly twice as likely as men to graduate.

The answers are complex, and with a variety of higher education options in Wisconsin, the scenario depends on the school and its course offerings.

Take UW-Green Bay. It graduated 837 women in 2011 — more than double the number of men. Although women outpaced men in graduation rate slightly, much of the discrepancy had to do with the institution’s history, said Debbie Furlong, policy and planning analyst at UWGB.

“The primary reason is the program array. We have very large programs in psychology, human development and nursing. Nationally, those traditionally enroll 70 percent or more as women,” Furlong said. “UWGB has a verysafe environment. There are things that are appealing to women, and it has a reputation for not being a party school.”

Women make up 57 percent of undergraduates nationally, and they’re projected to hit 59 percent by 2020. They also graduate at much higher rates. Across UW System’s 26 campuses, enrollment is 53 percent female and 47 percent male.

Experts have no single answer why more women graduate, but offer several theories:

The Grand Chute-based school that educates about 52,000 students each year enrolls many workers who have been displaced because of the recession.

“If those students have something come in the job market, they say they would leave in a heartbeat and go back to work,” Jorgensen said. “There are also a lot of students who understand the value of completion.”

Although more men are enrolled at FVTC this year, more women graduated with diplomas or two-year degrees, according to schoolrecords.

“With our nontraditional students, gender trends have fluctuated depending on the times,” Jorgensen said. “I’m not worried about it. We meet a need in the community, so whoever walks in our door we serve.”

Tim Higgins, a newly installed UW System regent from Appleton, also did not see cause for alarm.

“I know it’s been happening in terms of enrollment and some say boys are getting the short shrift,” Higgins said. “I don’t necessarily see a problem unless it indicates an inequity in the system, and I don’t think that’s true.”

Higgins noted the UW System graduates all students, regardless of gender, at much higher rates than even a few decades ago.

The gender disparity issue has gained particular attention in Texas, where 52 percent of men who enroll in public universities graduate within six years, compared with 62 percent of women.

Helping men close that gap could reap economic benefits for them, their families and the community.

Men with only a high school diploma have much higher unemployment rates (11.3 percent) than those with an associate’s degree (7.8 percent) or bachelor’s degree (4.8 percent), according to federal labor data.

“It is to our detriment if we do not start focusing greater attention on boys and the education crisis facing boys in this country,” said Victor Saenz, an education professor at UT-Austin who studies college attainment. “It’s a detriment economically, socially and in so many other ways.”