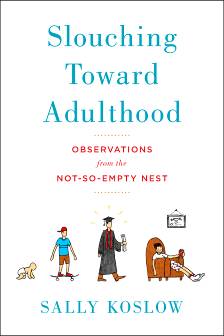 According to the US Census, by 2010 5.9 million people aged 25 to 35 were back living at home. This is just one of the shocking headlines we have seen recently about a generation of educated, unemployed or underemployed and often under-motivated adults. Recently, sociologists and therapists have attempted to identify and explain this explosive phenomenon.

What has been missing though is Sally Koslow’s SLOUCHING TOWARD ADULTHOOD: Observations from the Not-So-Empty Nest (Viking; On-Sale June 18, 2012; ISBN: 978-0-670-02362-2; 258 pages)—a book that gives voice to the millions of parents who are bewildered, and exhausted, by this growing trend among their young adult offspring: an unwillingness, or perhaps inability, to take flight. Koslow has deemed this group “adultescents,” a fitting name for these young people floundering between their teen years and early adulthood with their Baby Boomer parents hovering beside them.

SLOUCHING TOWARD ADULTHOOD is layered with recent studies and statistics—Koslow cites experts in the field, discusses the experiences of other parents, and young adults. It is an insightful, honest and hilarious trip into this important and timely cultural debate.

In SLOUCHING TOWARD ADULTHOOD, Koslow combines her strengths as a writer, as a cultural explorer and self-proclaimed concerned parent, unafraid to face the harsh realities of parenthood. Whether she is writing about the adultescent’s relationship with work (or no work) and money (a trip to on Mom and Dad’s dime, anyone?), or the adultescent’s unique approach to dating while living with the ‘rents, Koslow peppers her astute observations with affectionate humor and honest self-reflection.

SLOUCHING TOWARD ADULTHOOD is for all the parents who have sent their offspring off to college only to have their kids return right back to the nest with a diploma in one hand and the DVR remote in the other. It is also a cautionary tale for parents of today’s college students as well as future parents now in the adultscent crowd, themselves.

Today’s adultescents exist in a perfect storm of overconfidence, a sense of never-ending possibility and a grim reader of a job market. Koslow ends SLOUCHING TOWARD ADULTHOOD with a GPS for the future that smacks of tough love, forcing Baby Boomer parents to help guide their adult kids toward a path of deep and satisfying fulfillment.

Sally Koslow’s essays have been published in publications such as More, O, the Oprah Magazine, Real Simple, The New York Observer, Ladies Home Journal, Good Housekeeping, and Reader’s Digest, among other publications. She the author of three novels, including The Late Lamented Molly Marx, a Target Book Club pick. Koslow was the editor in chief at McCall’s and Lifetime as well as an editor at Mademoiselle and Woman’s Day. She teaches creative writing at the Writing Institute of Sarah Lawrence College. She lives in with her husband. Their two sons have finally moved out.