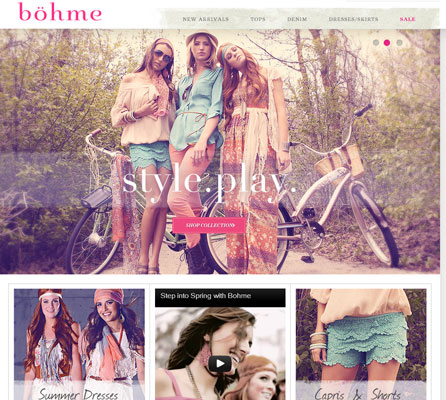 In the short five years that Bohme has been open it has found enormous success and learned valuable lessons along the way. This two sister team started small by renting a small seasonal space in a Utah Mall selling stylish yet modest women’s apparel; a trend that quickly picked up in the conservative town.

The business was not the first for Vivien and Fernanda as they ventured into a small business back in the 1990’s when they used to go around with their parents helping clean offices at night. They would notice how tenants had a need to take garbage out and how it was quite a walk for them, so the sisters decided to offer to carry the bags for the tenants at $0.25 a bag.

A solution to a simple need sparked their curiosity and led them to persevere in their most successful venture. They started small, and with no real knowledge of how to do a store layout or how much to charge they began their endeavor with the “modest has never been sexier” concept.

This concept later evolved into a more approachable style for their customer base, and this new approach earned the small business 57K in earnings in their first year alone. Once the business started growing Vivien and Fernanda had the need to expand, and with that came some financial challenges along with facing construction and development trials. Facing problems that would normally bring anyone’s hopes down, these sisters decided to put to good use their entrepreneurial minds and went as far as getting down and dirty and doing some renovations to their store themselves. With some funds finally secure, they moved along and opened their store in the Orem Utah.

Even though they started out with no money in the till and with Vivien’s 5th child on the way, the Bohme boutique was number 1 in their mall category that year. Taking advantage of this new wind of success they took the risky move to expand. In building their third store they faced yet another problem when the city stopped their construction, and once again instead of giving up they used the time to rebrand their store to what Fernanda refers to as “modern, feminine, and shabby-chic with a touch of rustic brown”. This new approach contributed Bohme to grow into the huge success it is today.

It currently has 12 stores across Utah, Colorado, Idaho, South Dakota, Nevada and Arizona; and it is projected to open 28 more stores in the next two years.