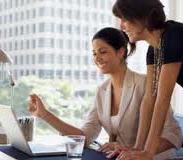 The Lean In Alternative: Why Leaning Back Also Works for Women in Business

Sheryl Sandberg’s Lean In has received both high praise and disapproval from women. Whether you agree with everything she writes or not, says Vickie Milazzo, the core lesson that women should lean in and become leaders in the workplace is solid advice. But, she adds, in their rise to the top, women should also make an effort to lean back to help other women.

Hoboken, NJ (March 2013)—The release of Lean In, new book by Facebook COO Sheryl Sandberg, has sparked a firestorm of attention from media and folks around conference room tables throughout country. Sandberg’s assertion that women in business should “lean in” and make more of an effort to lead is one that has garnered both nods of agreement and adamant disapproval from men and women alike.

Vickie Milazzo, a successful businesswoman in her own right, acknowledges that women should absolutely do everything y can to take on leadership roles in workplace. But in addition to “leaning in,” she says women in workplace should make “leaning back” a priority.

“To me, ‘leaning back’ means bringing or women with you as you achieve,” says Milazzo, author of New York Times bestseller Wicked Success Is Inside Every Woman (Wiley, 2011, ISBN: 978-1-1181-0052-3, $21.95, WickedSuccess.com). “Though women in workplace have come a long way, we often still make less than men who do same jobs as us. We are still systematically overlooked for promotions, even when we’re more qualified than man who ends up with job. And though it’s becoming less uncommon to see a woman heading up an executive team or running her own business, I think those of us who do reach success have a responsibility to bring women into our own power teams as we achieve big things.”

Milazzo has a great deal of experience on which to base her observations. As founder and CEO of a multi-million dollar company, she didn’t achieve her current level of success by going it alone. In fact, she is recognized as a trusted mentor and dynamic role model by tens of thousands of women.

“There is a stereotype that women would rar compete with one anor than collaborate,” says Milazzo. “But I rarely find that to be true. In fact, almost every day I’m struck by what women can achieve when y work toger. Without discounting special bond that women can have with men, fact is, we also need to fuse with or women in order to maximize our female potential. When you are connected to or strong women who complement, understand, and care about you, you will feel nurtured, empowered, inspired, and fired up, and y feel that way too! That’s what ‘leaning back’ is all about.”

Be a mentor. Not enough can be said of what we can learn from ors who have encountered and surmounted problems that are similar to our own. That being case, as y take on leadership roles and reach ir goals women should become mentors and actively seek to pass on ir skills to up and comers.

“I’ve been in business for three decades, and I still learn every day from my students, staff, writers, speakers, business experts, and more,” shares Milazzo. “I consider m all my mentors. Being a mentor to women is also a big priority for me. I look forward to time I spend mentoring women, and it always proves to be time well spent because in end I think I learn just as much from m as y do from me.”

Speak up. Commodities are easy to obtain and easy to replace. That’s certainly not how anyone wants to be perceived at ir job, but that’s exactly what happens to women who choose to lay low. Lead way by being an outspoken part of your organization. Don’t be afraid to make your voice heard.

Teach fine art of negotiating. Women who aren’t used to negotiating are especially susceptible to being intimidated by a show of force. Teach your network of women not to be afraid to demand respect.

“I’ve worked with plenty of attorneys, met some tough negotiators, and seen many different negotiation styles,” says Milazzo. “When I’m up against a pit bull, I’ll take a walk and role-play with my husband Tom, who can be a pit-bull himself. I anticipate every possible objection and get myself into a Zen-like state. When it comes time to negotiate for real, I am centered and ready. I know that if I allow myself to be intimidated or provoked instead of remaining calm and professional, negotiations are destined to fail. It’s this kind of advice that doesn’t always make it down line to women as y’re trying to rise up in an organization or get a start up off ground. Share it, if you’ve got it!”

Say no. Sometimes best way to lean back is by simply modeling right behavior. When women on rise see you do (or not do) a certain thing, y’ll see that it’s ok for m to make that choice as well. One such behavior is avoiding over-commitment by saying no.

“Saying ‘no’ to some things means you will have time and energy to say ‘yes’ to right things,” explains Milazzo. “You need to set your own expectations of what you want to accomplish. Don’t let your career or life take a backseat to everyone else’s. When or women see you boldly make this choice, y’ll be brave enough to do it too.”

“I find that women excel at connecting and collaborating to solve problems,” says Milazzo. “The success that comes from this process provides sanity, support and genius solutions. It’s only when we come toger and engage in conversation that we raise new questions and think of possibilities at a collective level we would not have considered on our own. Inside every woman is a natural collaborator. That’s a wicked advantage we have as women, an intellectual edge we can leverage for using our genius at highest possible level. When you collaborate, everyone involved benefits.”

“In business—and life in general— best long-term strategy isn’t to get ahead and stay ahead of everyone else” says Milazzo. “Instead, it’s to partner with ors—to give everyone a piece of pie and build up people around you—so that everyone has an incentive to win. When you give or people a bit of advice, a word of encouragement, a few minutes of your time, or even a sought-after opportunity, you’ll usually see valuable returns.”

“This is really what’s at core of ‘leaning back,’” she concludes. “Time is a valuable gift. Mentoring is a valuable gift. Spiritual or emotional support is a valuable gift. If you want more money, encouragement, or love, give it today and you will receive it tomorrow, but not necessarily from people you give it to. It comes through or manifestations. By giving back, I have received more abundance in every aspect of my life than I ever dreamed possible.”

Vickie Milazzo, RN, MSN, JD, is author of New York Times bestseller Wicked Success Is Inside Every Woman (Wiley, 2011, ISBN: 978-1-1181-0052-3, $21.95, WickedSuccess.com). From a shotgun house in to owner of a $16-million business, New York Times best-selling author Milazzo shares innovative success strategies that earned her a place on Inc. list of Top 10 Entrepreneurs and Inc. Top 5000 Fastest-Growing Companies in .

Vickie is owner of Vickie Milazzo Institute, an education company she founded in 1982. Featured in New York Times as pioneer of a new profession, she built a professional association of more than 4,000 members.

Vickie has been featured or profiled in numerous publications, including New York Times, Entrepreneur, Houston Chronicle, Ladies’ Home Journal, Texas Bar Journal, Los Angeles Times, Philadelphia Inquirer, and in more than 220 newspapers. Vickie has appeared on national radio and TV, including FOX & Friends and National Public Radio program This I Believe and more than 200 national and local radio stations.

She is author of Wall Street Journal bestseller Inside Every Woman: Using 10 Strengths You Didn’t Know You Had to Get Career and Life You Want Now. Vickie is recognized as a trusted mentor and dynamic role model by tens of thousands of women, a distinction that led to her national recognition as Stevie® Awards’ of Year.