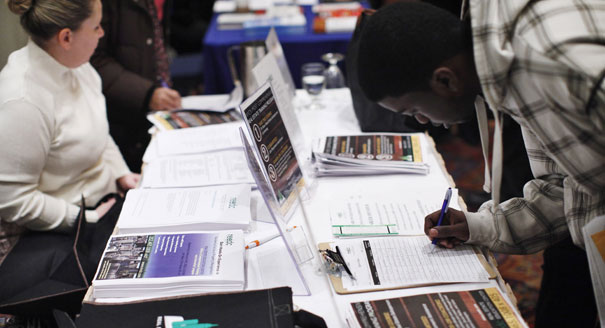 WASHINGTON (AP) — The number of people seeking unemployment benefits in the U.S. fell to the lowest point in almost four years last week, the latest signal that the job market is steadily improving.

Weekly applications for unemployment benefits dropped 13,000 to a seasonally adjusted 348,000, the Labor Department said Thursday. It was the fourth drop in five weeks and the fewest number of claims since March 2008 — six months before Lehman Brothers collapsed and only a few months into the Great Recession.

The four-week average, which smooths out fluctuations in the weekly data, fell for the fifth straight week to 365,250. The average has fallen nearly 13 percent in the past year.

The consistent decline indicates that companies are laying off fewer workers, and hiring is likely picking up further. When applications drop below 375,000, it usually signals that hiring is strong enough to lower the unemployment rate.

Jeremy Lawson, a senior economist at BNP Paribas, said the report points to solid hiring this month, similar to the average net gain of about 200,000 in the past three months.

“Most indicators are pointing in the same direction: a healthy job market,” Lawson said. The additional jobs will provide more income for consumers and support greater spending, an importance source of growth.

In January, the economy added a net 243,000 jobs, the most in nine months. And the unemployment rate dropped for the fifth straight month, to 8.3 percent. The economy has added an average of 201,000 jobs per month for the past three months.

Faster economic growth is spurring the additional hiring. The economy expanded at an annual rate of 2.8 percent in the final three months of last year — a full percentage point higher than in the previous quarter.

Most economists expect growth to slow in the current quarter, because companies won’t need to rebuild their stockpiles of goods as much as they did last winter.

But there are signs that the economy is still expanding at a healthy rate. Factory output got off to a robust start this year, and it ended 2011 with the fastest growth in five years, the Federal Reserve said Wednesday.

Factories are adding jobs to keep up with higher demand. Manufacturers added 50,000 jobs last month, the most in a year.

Still, the job market has a long way to go before it fully recovers from the damage of the Great Recession. Nearly 13 million people remain unemployed. And 8.3 percent unemployment is still painfully high.

One reason the unemployment rate has fallen for five straight months is that many people have stopped looking for work. The government counts people as unemployed only if they are actively looking for a job.