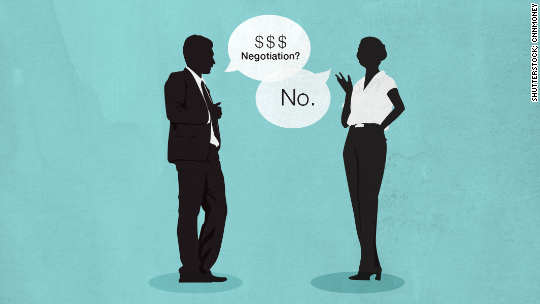 Flirting can benefit women in negotiations, according to a study by UC Berkeley Business Professor Laura Kray.

“Feminine charm,” as Kray calls it, is more about using a woman’s natural personality than making sexual come-ons. And it’s not about playing “the weaker sex.” Powerful women from former U.S. Secretary of State Madeline Albright to the female executives Kray teaches have admitted to using, and enjoying, flirtation during the negotiation process. The study finds that women’s flirtatious negotiation styles projected confidence, which may account for their increased success.

These findings seem at odds with Reddit CEO Ellen Pao’s announcement last April that the multi-billion-dollar tech-company would institute a company-wide ban on all salary negotiations. Pao’s reasoning is that men generally come out ahead of women in these negotiations. But if women are capable of negotiating successfully, as Professor Kray demonstrates, the problem may be that more of them don’t negotiate, rather than simply being poor negotiators.

Still, a national conversation about pay equity is a positive thing, especially because many younger women assume wage disparity was a battle fought and won in the past. And Pao has become an unofficial champion in the battle against gender-discrimination in the workplace as a result of her unsuccessful but high-profile 2012 lawsuit against venture capital firm Kleiner Perkins Caufield & Byers.

In response to Reddit’s policy, many people argued that a ban on salary negotiations constitutes a form of employee punishment. If so, is this a just or unjust punishment?

Pao has a point: Salary negotiations do overwhelmingly favor men. The same qualities that make men successful negotiators — such as confidence, frankness and a willingness to question the status quo — are perceived as pushiness or overbearingness in women. Many women avoid salary-negotiations altogether out of a rightly-justified fear that their efforts will lead to managerial reprisal.

And while Reddit’s policy was conceived out of concern over fairness between genders, pay disparity is a broader issue that affects people across racial and ethnic lines as well. This is especially a problem in the Silicon Valley world Pao inhabits. Banning salary negotiations is a kind of nuclear solution to this problem — if one group can’t benefit from it, then no one can.

But is that the best solution?

If the ability to benefit from salary negotiations is regarded as a privilege one group has more access to than another, then the elimination of that privilege could be seen as a form of punishment.

On the other hand, if the problem of salary inequality is more a result of institutional and managerial bias — where men are favored over women — is it fair to hold rank-and-file employees responsible?

Viewed through the criteria of author Robert Bacal’s five discipline sins, it’s clear that Reddit’s decision is an example of ineffective discipline in the workplace.

For one thing, Reddit’s policy turns the issue of pay disparity, which everyone, regardless of gender or race, is affected by, into an “I-You confrontation” or in this case, a men-versus-women confrontation. Instead of creating divisions between employees, Reddit could invest in negotiation training and informal conversations in which employees share their experiences with negotiation, fears about it and any tips for improvement.

Also, the ban on salary negotiation feels like “too little, too late,” meaning problems are addressed after they’ve manifested, rather than before. In this case, Reddit tries to address the symptoms of a long-standing problem — the male-female wage-gap — with a single policy. It’s an admirable effort, but such a deep-rooted trend won’t be eliminated just because a few executives say so.

Instead of trying for a sweeping solution, Reddit’s management should look more closely at the causes of favorable bias toward men in salary negotiations. Is this specifically a problem within the company or part of something bigger? Did Reddit analyze its own practices and patterns, or identify specific managers as contributing to the problem, before it took the drastic step to ban negotiations entirely? Bacal argues that discipline should start from the position of least possible use of power and escalate only as necessary.

When they overlooked the root causes of wage discrepancies, Pao and Reddit’s other leaders missed an opportunity to find a more constructive, unifying solution.

But for as much as Pao got wrong in her decision to ban salary negotiations, she also got some things right. A lack of transparency around starting salaries and raises can make employees feel skittish and uncertain about their future prospects. Skittish employees lose focus. They become less motivated to excel if they believe raises are handed out arbitrarily instead of being based on an objective set of performance measurements. Employees lose any sense of a personal stake in their work. They gossip and backbite. They whisper about salaries, and the air reeks of distrust and jealousy.

Worse, wage-uncertainty has a trickle-up effect — it stifles job-growth and mobility, while increasing employee turnover. The industry stays the same size, but employees change jobs across it more often.

By banning salary negotiations, Reddit eliminates uncertainty and eases employee’s minds. But more companies are turning to transparency as a better way to increase fairness across the organization.

Dane Atkinson, CEO of SumAll, an NYC analytics company, explains that “I’ve never been in a company where salaries haven’t leaked out at some point and caused a huge amount of damage.” This is why Atkinson created an “open-salary” policy at his firm. An internal document accessible to all employees lists the salaries of everyone at the company. While Atkinson admits the policy has caused a few awkward moments, he believes that the pros outweigh the cons, leading to “better equality” for all.

Today, workers are asked to do more than ever, wages are at a record low and benefits aren’t far behind. It’s no surprise that more people are looking for ways to make money through side jobs and self-employment options. Salary negotiation represents the one tool an employee confident of their worth has over their employer. By removing this option, a company further disempowers its workers and all but guarantees that wages will trend toward increased stagnation. If employees are robbed of the right to fight for themselves, who’s going to do it for them?

Gender discrimination and other biases are not only deeply-ingrained within the workplace, but across all of society. However, business owners who want to combat the issue of gender bias shouldn’t focus only on the ways it manifests, such as in salary negotiations. Businesses must also try to address root causes, including organizational indifference to systemic gender bias on the part of leadership.

One solution is to draw on the example of private-sector unions, which boast an average wage-gap of only 9.4 cents, contrasted against a national average somewhere north of $0.70.

How do unions accomplish this astounding feat of progressive equality?

Employee contracts are passed on an organization-wide basis. Contracts are drawn up by lawyers and enforceable by law on behalf of all employees. And when contracts expire, employees have the power to renegotiate for better terms. Private-sector unions take transparency even further. The salaries of all employees — yes, even the CEO — are, by law, a matter of public record. Salaries are accessible by anyone (including fellow employees) via the Department of Labor website. And wages are subject to regularly scheduled increases.

How’s that for bold measures?

Ultimately, while Reddit’s new salary negotiation policy might not be perfect, Pao and her company definitely deserve credit for taking on the issue of compensation equality. Hopefully Reddit’s example will inspire other companies to adopt similar policies as upper-level management teams continue to come to terms with inherent biases and structures within their own organizations. In a world in which women are outpacing men in degree completion, equal pay for equal work will continue to be an important issue that affects all American workers and their families.

Anum Yoon is a personal finance writer who believes that financial literacy is the key – especially for women – to lead a more purposeful and inspired life. She is the founder and editor of millennial money blog, Current On Currency.