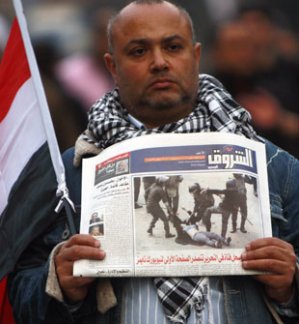 Here in American, women clamor for equality in the workplace. But elsewhere, women struggle just to have basic rights. None of this is more evident now than in Egypt, a country who already overthrew a dictator but must continue to fight for justice against their own military.

In America, women’s greatest battle has been equality in the workplace. Equal hiring preference, equal pay, and equal opportunity for promotion. But nevertheless women can vote, drive, own property & land, divorce their partners, and vie for custody. They have legal and societal rights, even if some of the work-related customs aren’t quite as good as they should be.

But elsewhere women are not so fortunate. The continued unrest in Egypt is evident of that, as the “girl in the blue bra” in Tahir Square has become a rallying cry and icon of uprest in the country. The Egyptian people are currently clamoring for their right to self-rule and justice, and women especially are arguing for secular rights. Instead, the nation’s own military is lashing out at them with violence and sexual harassment.

In Saudi Arabia women are not even permitted to drive themselves. Those who have were arrested. In even stricter countries women are not allowed to show their faces or any skin.

The worse part of this all is that it isn’t just the government, but a sizeable portion of the population enforces these decrees. It is a societal problem, not just a municipal one.

Now not all Middle Easterners believe this way. But those that do find themselves with the backing of their government and religious leaders, and that gives them free reign to oppress with impunity.

This is a lesson that women all across the world should keep in mind, that their rights aren’t always standard elsewhere. That as much as women must fight for their rights here in America, they shouldn’t turn a blind eye to their sisters across the globe.

What are your thoughts on this? Is there something women in America can do? Leave your opinions and ideas in the comments below.